The Press Conference that Never Happened 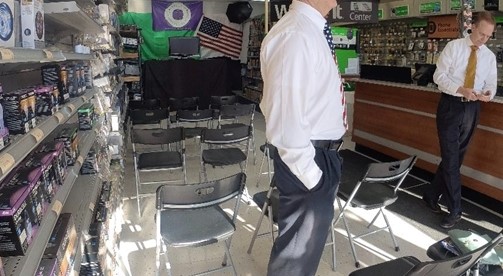 (Scott and Brad at the Press Conference that never happened)

I’d like to share with you today what happened one month before the surge of activity beginning on August 5th 2021 (launch of our 17 minute video) which culminated in a wave of endorsements and donations hitting us as hundreds of thousands of people watched our video (on YouTube and Brighteon, etc.) about suing the corporation masquerading as our government and how we can take back our country. Many people misheard this decree as ‘We will sue the government in their court system’. The truth is we have our own court, and We the People will be the Judges.

The oddest part of this story refers back to the month prior, on July 6th 2021, where we invited the press to attend the pre-launch of this video. Many emails to pressrooms gave us hope for a large gathering of reporters and media newsroom’s staff. And all of this was brought to a head when one media rep asked to speak to Scott prior to the press conference. He saw the same video that you have all watched; the 17 minute video where Scott asks us to join in a great movement to stop monopolists and to stop the massive corruption in our so-called “government” by turning it back to the people.

This one media rep, who represented several local stations, actually teared up and asked how he could help spread this message as it spoke to his very patriotic soul. One day later he suddenly went silent. And not just him, but all newsrooms went silent. Although we opted to hold the press conference anyway, we were not expecting a complete news affiliate boycott. That’s right, not even one reporter showed. Efforts to contact the media rep and other specific reporters afterward were met with a wall of silence. It was not dread that we felt from these worker bees, but fear.

As with all the mainstream media, we suppose that they were threatened with their jobs if they reported on this event. And even when two local newspapers reported about our movement, they did not reach out to us prior to writing their “hit pieces”. They merely reported what they suspected about our movement instead of what it’s really all about which is freedom and liberty!
Now jumping forward to August 5th 2021: the launch of our first version of our Website and the 17 Minute video: The video was flagged quickly on YouTube but after a period of time was found to have no improper language or negative call to action. It was allowed to continue on YouTube and Brighteon where it had high volumes of likes and views. This wave of enthusiasm continued and our website was overwhelmed.
The point of this story would not surprise those who have been following us since the beginning. But what many may not know is that those very platforms where our video was receiving huge amounts of traffic – abruptly throttled down our traffic. They, YouTube and Brighteon obviously have had the “higher ups” tell them to throttle us down.

The wave of our movement is being held back from getting to the people. We are thankful to those of you spreading the word, but several internet platforms have slowed our message. There are good things to come however. I can tell you that the things we are working on, spoken of in Scott’s book “MAP OF THIEVES”, will create a much larger tsunami-like wave; widespread and powerful. The timing of all these things is by God’s divine will. We have witnessed some very large setbacks that are actually blessings in hindsight. We are developing the tools we will need to give power to those who should be running this county: to We the People who will be running it. Voting for the same frauds who have the ‘New World Order’ agenda in their hearts and who do not have the desire of freedom and liberty for you, is a vote for tyranny to continue. Their ballpark (their fraud) will not stand, but will come tumbling down.

Taking away their power without violence and returning to the original constitution is the goal. We don’t need their permission to ask for freedom, it’s ours already. Controlling our freedoms is not right, yet it seems to be the goal of this current so-called “government” and their grip is getting tighter and spreading much farther. There are many examples of people who have our best interests at heart, but there are many that embody evil, arrogance and the desire for supreme control. The last couple of years is a prime example of the actions and intentions of evil people to implement the New World Order, however, the power they hold today will turn to dust in their hands and their evil desires will be meaningless in the eternities. We will take back our country by standing against the monopolists who have stolen it from us.

Be of good cheer, Freedom and Liberty are in our hearts here at Friends of the Original Constitution and in yours as well. We want the government of the people, by the people and for the people and for it to be managed as it was originally laid out. It means, however, casting off of many habits that we have collectively developed. You and I have to be willing to serve in capacities that have been previously given away to lifetime politicians. No more will those who were voted in by the people be able to prosper by their positions – and no more will career politicians be in We the People’s government. This is simple in principle but requires that WE are much more involved in the governance of our Country.

God Bless Us All,

This entry was posted on Monday, May 9th, 2022 at 4:20 pm and is filed under Uncategorized. You can follow any responses to this entry through the RSS 2.0 feed. Both comments and pings are currently closed.